skip to main | skip to sidebar

I am breaking with the Memory Lane reveries to bring some breaking news in the family about Ma, family matriarch. Since Donnie's mother died in 1999, my mother, shown here with Lizzie, has become the family matriarch. One sort of expects matriarchs to go on forever, and those who have read my book, Blest Atheist, certainly know that Ma was not a model mother but very abusive. Nonetheless, a mother is a mother, and a matriarch is a matriarch. One does not think about the death of matriarchs. Nonetheless, that is the situation we are facing -- maybe -- right now.


Two days ago Ma, who has always been strong as a horse (comes from living on a farm), had a massive stroke that has paralyzed her right side and voice (extremely frustrating for her because she is a talker -- one listens, she talks). Today, the doctors determined that she cannot swallow and will need a feeding tube to live, but they are giving her the choice whether to have the feeding tube or not since she is coherent and can communicate by nods. There is also the complication that the surgery to put in the tube could be deadly because her high blood pressure is still not contained.

She was, at first, leaning against the tube but is now leaning toward it. The cboice is to battle on or rest in peace. It is rare that one really has a choice in which both versions are so different but can be right and natural.

While her 8 children would like to weigh in on the decision, of course, we are all giving her the space to make the decision without influence.

Prayers, please, for the grace to make the choice a spiritual one.

Posted by Elizabeth Mahlou at 3:45 PM

This site was originally designed for linking the longer family posts and pictures that did not fit easily on my main blog, 100th Lamb. Over time this blog has become the story of our family, past and present. More recently, I have been posting excerpts from a new book I am writing about our family experiences: Raising God's Rainbow Makers. Here you will also find my conversion story. Many thanks to the followers of this site for becoming part of our family.

Daily updates on family members who are "in the family news" are available on the Twitterlets.

Nathaniel and Nikolina have moved into a more normal set of life activities, now possible with the stabilization of Nikolina's health. Some of her routine care has been transferred from Stanford University Hospital to local doctors. This makes life easier for everyone. With her gross motor development delayed because of disabilities and surgery, Nikolina has been progressing in fine motor development faster than typically expected and is now beginning to draw and to type. Of course, Nathaniel is a great help to her in this respect.

Updated pictures of Nathaniel and Nikolina are added periodically at the end of the post about them.

Here is a picture of Nikolina that Shane took at a local restaurant. That smile on her face never goes away; I think she knows how lucky she is to be alive -- and to be intellectually normal and performing at age level is absolutely remarkable. (She still is missing some body parts, but she has never needed a feeding tube or any other kind of support since being released from the hospital.) 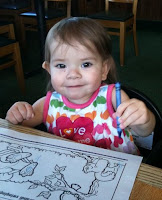 In addition to information about the Mahlou clan members, I have posted my conversion story to this site.

Elizabeth Mahlou
I am the mother of 4 birth children (plus 3 others who lived with us) and grandmother of 2, all of them exceptional children. Married for 42 years, I grew up in Maine, live in California, and work in many places in education, linguistics, and program management. In my spare time, I rescue and tame feral cats and have the scars to prove it. A long-time ignorantly blissful atheist converted by a theophanic experience to Catholicism, I am now a joyful catechist. Oh, I also authored a dozen books, two under my pen name of Mahlou (Blest Atheist and A Believer-in-Waiting's First Encounters with God).

A Guide to the Clan

Using Elizabeth (me) as the center (only because I am the one doing the blogging), here is how the clan is related:

Here are the three children who came to live with us, in order of when they arrived:
Blaine (from the barrio of Salts)
Shura (from Siberia)
Ksenya (from Moscow)

There were also others who lived with us for a year or more:
Vanessa and her three children (abandoned mother)
Rollie (my brother)
Victoria (my sister)
George (a colleague of Donnie's who could not find a place to rent because he was black living in a principally white location)

And, of course, our cats:
Murjan
Intrepid
Simone

With time, I will add to the content. In the meanwhile, see the alphabetical listing under "family members" below to find out about those for whom I have posts.

100th Lamb. This is my main blog, the one I keep most updated. I link from there to here when I want to use one or another of my writings there.

Mahlou Musings.
This site contains excerpts from my various publications.

Modern Mysticism. This blog discusses the mystical in our pragmatic, practical, realistic, and rational 21st century world and is to those who spend some or much of their time in an irrational/mystical relationship with God. If such things do not strain your credulity, you are welcome to follow the blog and participate in it.

I dreamed a dream of a burning house
With brothers and sisters and a cold bitter spouse.
The halls were all crooked, the doors were ajar.
I heard all their cries from the road in my car.

I put on the brakes and came to a stop
While an old jackrabbit went hippity hop.
I looked back again, and the house was ablaze.
The people inside just looked in a daze.

The curtains were tattered, the roof was not straight.
The hinges were knocked off the broken front gate.
The paint was all weathered, and the shutters hung loose.
A shadow on the barn door looked like a noose.

A kid outside shouted, "There's a fire there, you see".
But Mama kept screaming, "Come back here to me".
"No, I cannot, ‘cause your house is on fire".
But nobody listened as the flames grew still higher.

Once in a while a child would run out,
But Mama and Papa would just scream and shout.
The kid in the yard would utter a scream
As a child ran back in as if in a dream.

Soon the house burned right to the ground.
The kid in the yard made not a sound.
I opened the door, and she sat on the seat.
She didn't look back because of the heat.

I stepped on the gas, and we sped away.
I opened my mouth, but what can you say?
"They had to go back," was her soft reply.
All of them chose their way to die.

I turned on the light; she was just seventeen.
She was the prettiest girl I'd ever seen.
I'll never forget the night I stopped there,
‘Cause I married that girl with the long, flowing hair.